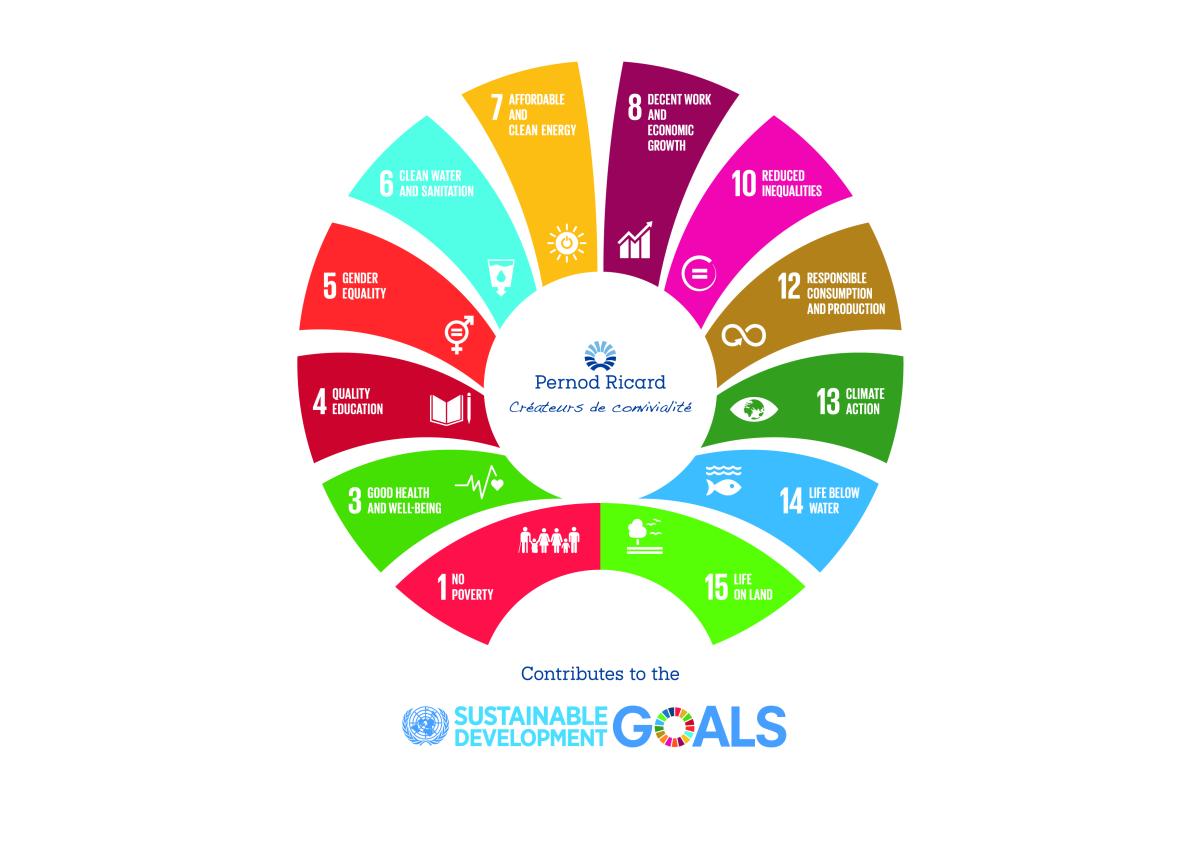 Paris, July 1, 2016 /3BL Media/ -- Pernod Ricard believes that the Sustainable Development Goals (SDGs) are a unique opportunity for all stakeholders (Governments, the civil society, the academic and scientific community and the private sector) to conduct all of their efforts into the same direction in order to make the world a better place. Pernod Ricard is convinced that everyone has a role to play towards these Goals for 2030.

Although it takes multiple actions contributing to all 17 SDGs, Pernod Ricard selected 12 where its impacts are or can be the greatest, thanks to the business indicators developed by the United Nations Global Compact, the Global Reporting Initiative (GRI) and the World Business Council for Sustainable Development (WBCSD). Click here for more information.

Even though, the SDGs were launched in September 2015, Pernod Ricard has committed for a long time to sustainable development and can already report significant progress towards meeting Sustainable Development Goals. To illustrate, we have selected several examples of different Goals:

Goal 3 - Good health and well-being
To support Goal 3 to “ensure healthy lives and promote well-being for all at all ages”, many programs such as education and raising awareness on the dangers of harmful consumption of alcohol exist and demonstrate their efficiency everyday:

Goal 6 - Clean water and sanitation / Goal 14 - Life below water
In line with Goal 6 to “ensure availability and sustainable management of water and sanitation for all”, Pernod Ricard sets, every 5 years, objectives to reduce its water consumption and to ensure that its water intake does not endanger resources as a signatory of the United Nations CEO Water Mandate. We aim to reduce water consumption per unit produced at production site by 20% between 2010 and 2020. We already decreased by 14% during the 2010-2015 period

Although, water is a fundamental ingredient for the Group since its origin. Thus, when Paul Ricard created the Deep Sea Observatory 50 years ago, which later became the Paul Ricard Institute of Oceanography. It conducts research to find natural solutions for a better relationship between men and sea according to an eco-systemic approach. As a result, the Group strongly supports Goal 14 to “conserve and sustainably use the oceans, seas and marine resources for sustainable development”.

Goal 8 - Decent work and economic growth / Goal 1 – No poverty
Pernod Ricard contributes to Goal 8, “Promote sustained, inclusive and sustainable economic growth, full and productive employment and decent work for all”, by involving its 18,500 employees through 85 countries. The Group is committed via the United Nations Global Compact to eliminate forced or compulsory labour and to effectively abolish child labour.

It also supports Goal 1, “End poverty in all its forms everywhere”. In 2014, 110 local agreements were signed with different social partners covering issues such as profit-sharing, salaries and equal opportunities…. The same year, Pernod Ricard and EFFAT (European Federation for Food, Agriculture and Tourism Trade Unions) signed a European agreement on Corporate Social Responsibility including health and safety at work, social dialogue, death in service cover, contributing to social and economic development, and reducing environmental impacts. In addition, by 2020, Pernod Ricard has committed to applying the principles of this agreement in all of its affiliates worldwide. The Group is already committed to offering death insurance to all employees by 30 June 2016.

Meeting the SDGs is a long-term endeavour, in which Pernod Ricard plans to continue engaging actions throughout the world as it has always done since its creation. Pernod Ricard is even more enthusiastic after attending the United Nations Global Compact Leaders Summit 2016 where the UN called all businesses to act now, to spread the word about the SDGs and to integrate sustainability into their core activities.

For André Hémard, VP S&R of Pernod Ricard, "Pernod Ricard actively supports the United Nations Sustainable Development Goals. It’s a unique agreement that invites all stakeholders including the private sector to contribute to these objectives. Already all of the 18,500 Pernod Ricard employees are the first ambassadors and are proud to contribute to these objectives in their daily activities. The Responsib'All Day, which took place on 2 June 2016, is a good example of the ability of women and men of the Group to engage themselves toward communities in 85 countries by contributing to several of the 17 Goals.”

About the SDGs
The Sustainable Development Goals (SDGs), officially known as “transforming our world”: the 2030 Agenda for Sustainable Development, are an intergovernmental set of aspiration Goals with 169 targets. The SDGs contains 17 goals covering a broad range of sustainable development issues. These included ending poverty and hunger, improving health and education, making cities more sustainable, combating climate change, and protecting oceans and forests.

About Pernod Ricard
Pernod Ricard is the world’s No 2 in wines and spirits with consolidated sales of €8,558 million in 2014/15. Created in 1975 by the merger of Ricard and Pernod, the Group has undergone sustained development, based on both organic growth and acquisitions: Seagram (2001), Allied Domecq (2005) and Vin&Sprit (2008). Pernod Ricard holds one of the most prestigious brand portfolios in the sector: Absolut Vodka, Ricard pastis, Ballantine’s, Chivas Regal, Royal Salute and The Glenlivet Scotch whiskies, Jameson Irish whiskey, Martell cognac, Havana Club rum, Beefeater gin, Kahlúa and Malibu liqueurs, Mumm and Perrier-Jouët champagnes, as well Jacob’s Creek, Brancott Estate, Campo Viejo, Graffigna and Kenwood wines. Pernod Ricard employs a workforce of approximately 18,000 people and operates through a decentralised organisation, with 6 “Brand Companies” and 85 “Market Companies” established in each key market. Pernod Ricard is strongly committed to a sustainable development policy and encourages responsible consumption. Pernod Ricard’s strategy and ambition are based on 3 key values that guide its expansion: entrepreneurial spirit, mutual trust and a strong sense of ethics.

Best of Responsib'All Day 2016: Employees Sharing Convivialite with the Communities