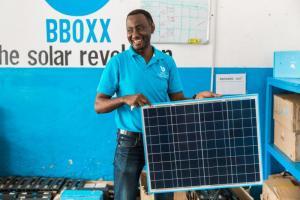 Many parts of Africa that were never linked to an electric grid are skipping that bit and racing ahead with the solar revolution, thanks to off-grid solar. Several companies, including Off Grid Electric, Bboxx, Azuri Technologies and M-Kopa, have built a massive customer base that is bringing sustainable progress to that part of the world.

The figures are impressive. According to the UK Economist, it is estimated that off-grid solar can now be found in 600,000 households in Africa. (M-Kopa alone has installed 400,000 systems). Industry pundits and insiders reckon the number will grow by 60 to 100 percent in the next year.

The Economist highlights several reasons for the advance in off-grid solar. For one, there has been a massive decrease in the cost of solar panels—up to 80 percent since 2010. The pay-as-you-go model has also promoted a paradigm shift of selling solar electricity as a service rather than hardware. The appearance of more energy-efficient devices has also helped, especially LED bulbs which use only 20 percent of the energy of incandescent bulbs. Innovative business models suited to customer needs are also a factor.

Antonio Pasolini is a journalist based in Brazil who writes about alternative energy, green living and sustainability. Besides Just Means, he contributes articles on emerging technology to Gizmag. He is also a happy herbivore.

WE DO. Print Runs the Perfect Apprentice Scheme for Disadvantaged Youth