Grid Mod Sees Gaps in Progress; Blueprints Needed for Those Lagging Behind

Grid modernization is gearing up, with several states leading the charge 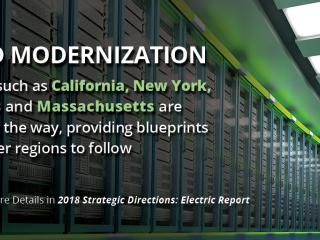 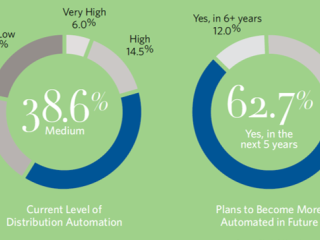 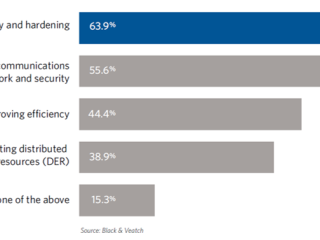 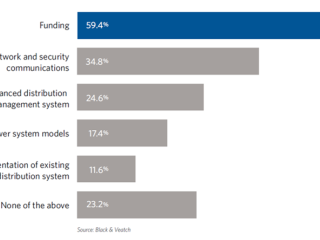 Grid modernization is getting into gear across the country as electric utilities continue to work to automate distribution and smarten the grid. Buoyed by validating data, states such as California, New York, Illinois and Massachusetts are leading the way, providing blueprints for other regions to follow.

Transitioning traditional networks to a more technically advanced grid has been going on for a long time, but the last five years have seen the industry crank up its investment in automation technologies. Data showing the reliability of automation and the operational efficiency of smart grids have encouraged further investment, while states with formal programs continue to give utilities the green light to advance.

Get the 2018 Strategic Directions: Electric Report

According to Black & Veatch's 2018 Strategic Directions: Electric Report survey, most utilities are employing or plan to employ some level of smart distribution system. Forty-one percent consider themselves at a low or very low level of automation, while 39 percent were placed at a medium level. Of those still in the planning stage, two-thirds (63 percent) hope to become more automated in the next five years (Figure 1).

However, one-fourth of respondents have absolutely no plans for future automation, which is not necessarily a measure of their support for technical advances but rather the likely scenario of smaller, more rural operations where a smart grid investment does not make good business sense. But for most utilities covered in this report, the main pillars of grid modernization plans continue to be the need to improve infrastructure and the ability of the utility to be secure and communicate.

Nearly two-thirds say reliability and hardening improvements are the main motivators for modernization, while 56 percent point to security and their network communications (Figure 2). Unsurprisingly, improving efficiency was right behind, with 44 percent noting it as a key goal of the planning.

A big factor contributing to hardening efforts are the reactions to last year’s wildfires and seawater intrusions as the result of drought and hurricanes. For example, utilities are replacing burned out wooden poles with metal ones; in the coastal flood zones, protections are being put in place around substations at risk of periodic flooding. As these changes take place, utilities are being pushed to improve resiliency by installing the latest technologies.

Grid modification planning for utilities has meant taking on a lot of new technology, especially in the segments of grid operation that have become popular for improvement. A little more than half of respondents indicated electrical asset and automation upgrades are getting the most attention, followed by network and security communications systems upgrades (55 percent).

About a third of survey respondents reported feeder and pole replacements and upgrades to advanced distribution management systems (ADMS) as key components of their distribution segment. The traditional utility pole offers one example of how change is taking place. Today’s poles are no longer the wooden behemoths of the past; instead, technical advances have transformed the pole into a high-tech platform of big data, sensors and large-volume communications.

This evolution has streamlined efforts for operators. In the past, four separate crews could be deployed to conduct automation upgrades, reconductoring pole replacement, communications and the third-party pole attachments. Now utilities are encouraged to take an integrated approach, relying on one contractor to handle and coordinate the construction, maintenance and  management of each pole.

However, the biggest challenges remain money and reliable security. Fifty-nine percent say funding is the biggest barrier to modernization, while 35 percent point to implementing and operating reliable network and security communications, such as transitioning to IP and wireless LTE networks as the chief obstacle (Figure 3).

A quarter of respondents said selecting an ADMS was the pressing challenge, and — to a lesser degree — developing power system modules and documenting the existing electrical distribution system. Survey results show that utilities believe they can do the upgrades themselves, with 31 percent planning to “self-perform” their smart distribution system. Twenty-three percent plan to use a project management office (PMO) contractor, 19 percent an “other third party” and 18 percent an engineering, procurement and construction (EPC) contractor to do the work.

Southern California Edison (SCE) stands out as a star in the development of its smart grid. Supported by robust state programs and servicing a sophisticated customer base with high environmental priorities, the utility’s planned grid modernization work focuses mainly on the distribution system that begins at the substation and continues down the lower voltage lines to the user.

With its eye squarely on the goal of increasing power reliability by way of significant grid upgrades, SCE has made several grid modernization investments. Along with upgrading its distribution hardware, cables and poles, the utility is making updates to accommodate new technologies such as smart inverters, which will allow for the two-way flow of solar energy.

It also is making sure its power system adoption is compatible with future California policy related to energy storage, electrical transportation demands and renewable energy. Many utilities want to move in the same direction as SCE, but they don’t know how to do it. According to the survey, more than 30 percent reported not knowing how to implement their smart distribution plan. Many utilities in this situation have spent the last five years or so in research and development and pilot phases, but they don’t know what to do first, or how to execute.

These questions will be answered as more utilities emerge from smaller starter projects and additional funding is secured. The industry may still be in its early days of grid modernization, but enough traction has taken place to give many utilities a starter set of the best practices.