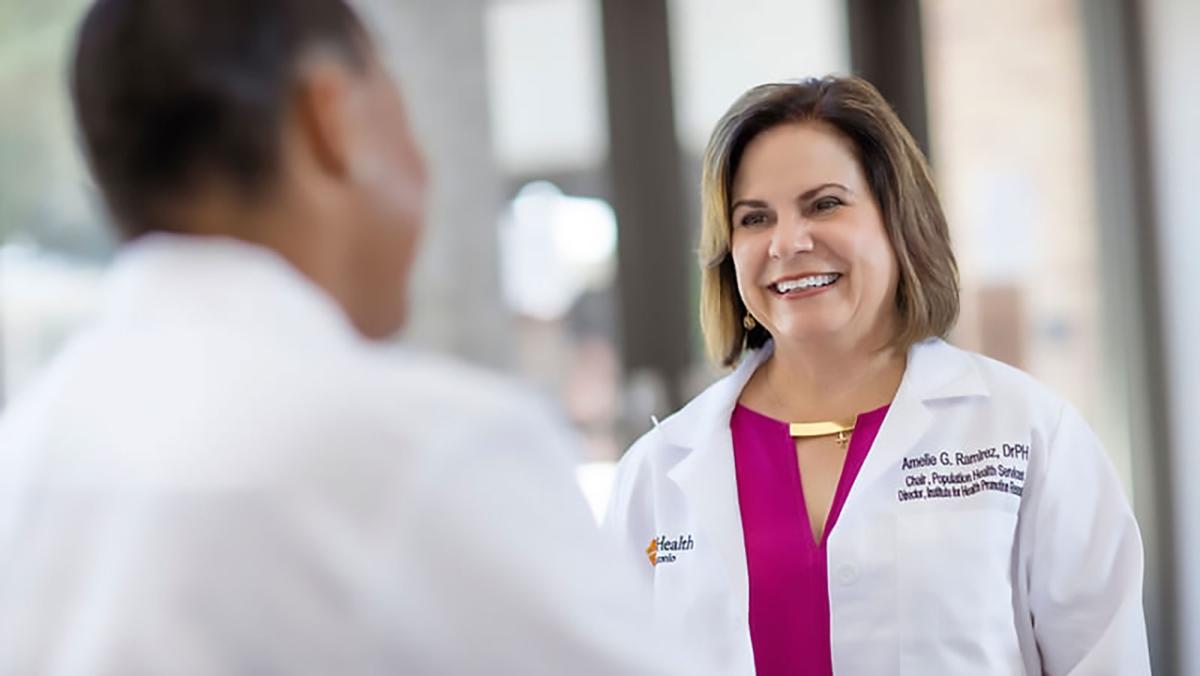 For nearly 30 years, Dr. Amelie Ramirez has sought to move the needle on health disparities in the Latino community through a mix of education, research and community-based care. Early in her medical career, it became clear to the Texas researcher that the Latino community wasn’t well-represented in the field and that culturally competent treatment for the population was lacking.

“Our community encounters so many barriers to getting good health,” she says. “But I consistently see a lack of educational resources around the importance of health, and this became the thread that connects all of my projects.”

Amelie is Professor and Chair of the Department of Population Health Sciences at the University of Texas Health in San Antonio, Texas, and Associate Director for Community Outreach and Engagement at the Mays Cancer Center. She has shared her research and insights with Gilead’s Patient Engagement Advisory Board as well as with the company’s Employee Resource Group, Gileados.

Understanding Health Barriers within the Latino Community
For Amelie, one of the first and most important aspects of creating equitable care for the Latino population is to better understand the health barriers they face.

“So many of our health issues are understudied,” Amelie explains. “Historically, data on health hasn’t been inclusive. Occasionally, there’s been a little bit of data on Mexican American communities, as they represent the largest proportion of Latino people in the United States, but Latino communities represent other ethnic groups as well.”

In the early 1990s, Amelie developed the first national research network, which later became known as Redes En Acción, to look at similarities and differences in cancer in the Latino community in comparison to other communities. She launched a study that consisted of more than 9,000 telephone interviews with people across the United States, to learn about the knowledge, attitudes and practices regarding cancer within the Latino community.

Amelie says the study’s findings were eye-opening, showing that Latino people had higher cancer rates in types with less developed therapies, such as liver, stomach and gallbladder cancers. In addition, individuals in the Latino community were more likely to receive care after their disease was advanced, limiting treatment options available.

“Physicians told me, ‘I have women coming in with large lumps on their breasts,’” says Amelie. “The women were scared or not sure how to access care.”

To try and make a difference, Amelie’s team began developing public service announcements on the types of cancers affecting the Latino community and the clinical trials that were available.

“We received some push back from the community,” she recalls. “There were people who said they didn’t want to think about cancer because they thought that might bring cancer to them. We knew we had to really increase our education component.”

Amelie found that education was implemented the best in the community by having promotores – trained, bilingual and bicultural community health workers – talk about screenings. She also advocated for culturally competent care so that when Latino individuals enter treatment, they’re met with staff who can respond to the nuances of their situations.

“A large proportion of our community doesn't have access to insurance,” she says. “It’s taken a lot of effort for us to collaborate with other organizations to support individuals who don't have health insurance to help them get the full continuum of care.”

Evolving The National Latino Cancer Research Network
That first research network has continued to grow. Thirty years later, Redes En Acción researchers are still going strong, with tens of millions of dollars raised to fund cancer research and health education in the Latino community. Now, they examine everything from prevention and early screening, to treatment and survivorship.

But Amelie isn’t done. She recently launched a first-of-its-kind study on cancer survivorship and Latino people. Amelie and the Mays Cancer Center, in partnership with Dr. Frank J. Penedo of the University of Miami, are recruiting 3,000 Latino cancer survivors to help unpack the social, cultural, behavioral, mental, biological and medical influences on post-cancer life.

The scope of her mission has continued to increase. She’s seen the Latino population grow in the United States throughout her career, and she’s hoping the medical industry catches up as well.