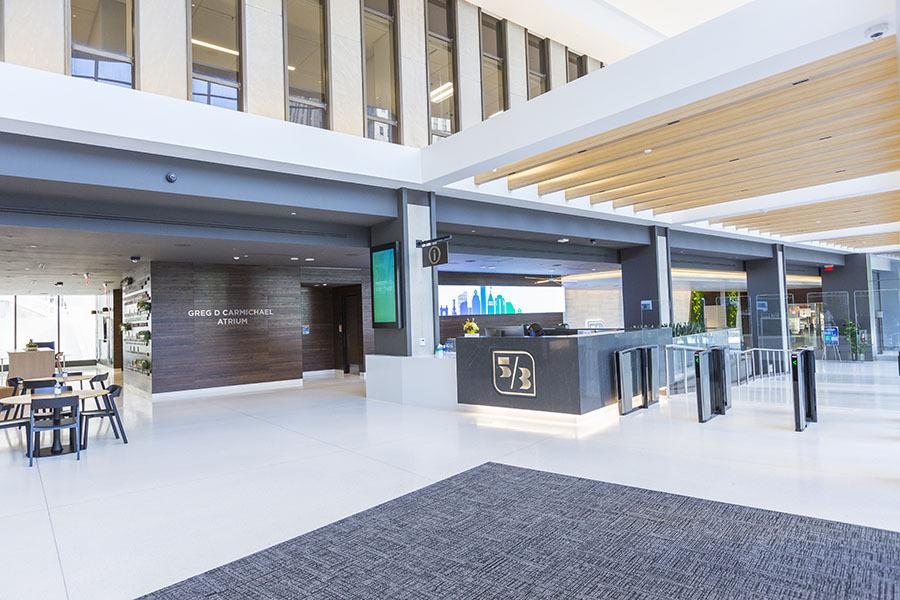 Fifth Third Bank celebrates the completion of a new signature two-story welcome atrium, a newly designed next-generation financial center, renovated and expanded retail space, as well as the Fifth Third Museum and Fifth Third Stage. The expansive “Project Connect” brings together the Bank’s two office towers at the first and second levels with a new 12,000 square foot entryway to Fifth Third Bank that reflects its values and transformation.

“Beyond the beautiful architecture that embellishes Fountain Square, this physical renewal reflects and personifies how much the Bank has evolved, modernized and grown on our transformational journey,” said Greg D. Carmichael, chairman and CEO of Fifth Third Bank. “We’ve wanted to create a welcoming campus where people can best connect, collaborate and innovate that honors and reflects our commitment to our employees who provide such great service to our customers and communities. It is a dedication to Fifth Third’s rich history of over 160 years, but above all it is a bold investment in our future and the Cincinnati community.”

In 1969, Fifth Third Bank moved into its new headquarters on Fountain Square, becoming the catalyst for the revitalization of the city’s historic central gathering place. By opening a new front door that embraces and magnifies the square, Fifth Third is making a commitment to the caliber of public spaces that everyone can enjoy. Fountain Square has been named one of the Top 10 best public squares in the nation in 2021, which in normal times has millions of visitors per year.

“As visitors and employees enter the new space, they are welcomed by a spacious, open public area with gathering places,” said Thomas Neltner, head of enterprise workplace services, who led the project. “The ceiling soars above, with an abundance of natural light flowing through a wall of glass. The view at evening will be even more dramatic with lights choreographed across the buildings.”

The initiative connects the Fifth Third Center’s Tower and the William Rowe Building creating a cohesive campus experience. The union of these two buildings further connects the Bank to Fountain Square with 77 tons of steel and 275 pieces of large glass, with more than 127,000 worker hours. This signature space is named the Greg D. Carmichael Atrium in recognition of the CEO’s leadership in transforming Fifth Third into a leading and innovative bank. Additionally, revitalization of the employee space on the inside of the Tower is ongoing and more than 70% complete, providing a new and welcoming environment for employee workspaces. Among the key new features for customers and employees are:

Fifth Third’s NextGen Banking Center. Our flagship financial center features innovative design to put our customers at the center of everything we do and serves as a testing center for our latest branch design concepts highlighting our latest technology, products and services. It is a space for customers to seek advice, guidance and partnership and have honest conversations about their financial needs with bankers they can trust in an open, transparent and safe space.

The Fifth Third Bank Museum, opened in 2019, has gained a new entrance. The museum archives more than 160 years of banking history with significant contributions to the City of Cincinnati and to our industry of helping customers achieve their dreams. Current stories of our commitments to communities are also built into the space. The Community Wall displays ongoing and varied community impacts. This single-story area also provides additional space for employees to work and meet with guests.

UNA, the acrylic celling sculpture, by artist Danielle Roney is an innovative approach and a reflection of data and messages – where the shapes and sequences of the acrylic pieces represent frequencies of words and the densities of our communities. UNA captures the culture and vision of Fifth Third and the communities we serve and is comprised of more than 780 pieces of acrylic tubes of varying length. The pieces, comprised of varying densities, also reflect the communities we serve: urban, rural and diverse.

The Water Wall, which is adjacent to the staircase that connects the atrium to the Forum, brings Fifth Third’s location on Fountain Square inside. The Water Wall is an artistic representation of the Tyler Davidson Fountain. It’s a digital experience for the five senses with the sound of water trickling down the wall and see how the integrated lighted panels shimmer like the sun reflecting on the water, mirroring the way Fountain Square shines as the jewel of the Cincinnati community.

The Forum, on the second floor, is a new gathering place and conference center. This space, designed to hold up to 300 people, includes numerous unique design features ranging from preservation of two historic vaults, one of which is a meeting area. The reuse of safe deposit boxes incorporated into the artistic décor and state of the art technology marks the reuse of space that was once the main lobby.

This ambitious Project Connect was the result of numerous cycles of collaborative planning and revisions to progress from vision to reality with the valued partnership of the Fifth Third enterprise workplace services, legal and security teams, 3CDC, BHDP Architecture, Messer Construction, CBRE, the Cincinnati Police Department, Cincinnati Fire Departments, and the City of Cincinnati.

Fifth Third Bancorp is a diversified financial services company headquartered in Cincinnati, Ohio, and the indirect parent company of Fifth Third Bank, National Association, a federally chartered institution. As of March 31, 2021, Fifth Third had $207 billion in assets and operated 1,098 full-service banking centers and 2,383 ATMs with Fifth Third branding in Ohio, Kentucky, Indiana, Michigan, Illinois, Florida, Tennessee, West Virginia, Georgia, North Carolina and South Carolina. In total, Fifth Third provides its customers with access to approximately 53,000 fee-free ATMs across the United States. Fifth Third operates four main businesses: Commercial Banking, Branch Banking, Consumer Lending and Wealth & Asset Management. Fifth Third is among the largest money managers in the Midwest and, as of March 31, 2021, had $464 billion in assets under care, of which it managed $58 billion for individuals, corporations and not-for-profit organizations through its Trust and Registered Investment Advisory businesses. Investor information and press releases can be viewed at www.53.com. Fifth Third’s common stock is traded on the Nasdaq® Global Select Market under the symbol “FITB.” Fifth Third Bank was established in 1858. Deposit and Credit products are offered by Fifth Third Bank, National Association. Member FDIC.

Fifth Third Bank Provides Tips on How To Budget During Inflation

Private Foundations in the Foundation Office at Fifth Third Bank Announce More Than $6.5 Million in 2022 Grants