eHighway: The First Public Road Use 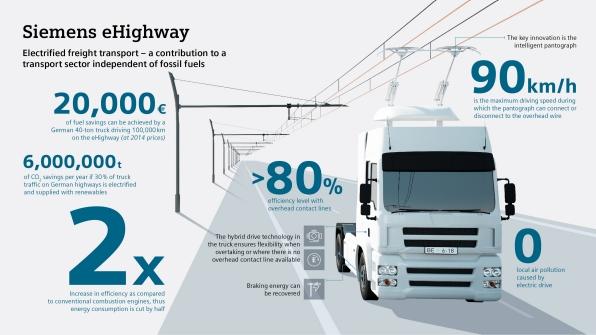 Pictures of the Future: Electromobility

Trucks equipped with electric pantographs are traveling a public road for the first time. Siemens has installed an overhead line for electric and hybrid trucks in Sweden. Two diesel hybrids from automotive maker Scania are being powered by electricity here, thus running exhaust-gas free. Siemens installed the two-kilometer eHighway north of Stockholm. The technology is expected to prove itself in practice there by 2018.

Experts expect freight transportation to triple by 2050. So in spite of an expansion of the rail network, considerably more trucks will be taking to the road. As a result, traffic in Sweden, for example, causes more than one-third of the country’s CO2 emissions. Almost half of that comes from freight traffic, which is why the country has decided that by 2030, its transportation sector will be independent from fossil fuels. But because of the increase in freight traffic, expanding rail capacity isn’t going to be enough. Instead, some solution has to be found to decarbonize road freight traffic. Electrified highways might be an optimum addition to the picture here. In a two-year trial run, Sweden wants to find out whether the Siemens eHighway system will measure up for permanent future use.

Twice as Efficient as Carriage via Diesel Truck
eHighway is an energy-efficient, low-emission solution that Siemens developed for heavily traveled short-haul truck routes. It includes overhead electric lines for the highway, and electric or hybrid trucks with intelligent pantographs to pick up current. A sensor system enables the pantograph to automatically make and break contact with the overhead line at speeds as high as 90 kph. As long as there’s an overhead line, the trucks generate no local emissions at all. On conventional roads, depending on what type of drive they use, they switch over to diesel, gas or battery mode. An eHighway, with about 80 percent efficiency, is about twice as efficient as transport via a diesel truck. That’s because electric drives are more efficient. On top of that, transmitting electricity via overhead lines is very environmentally friendly – efficiency here is 99 percent. The eHighway’s energy efficiency increases even further if the trucks recycle electric braking energy back to the supply network.