“At that vital summit, the world must honor the promises made here in Paris six years ago.” 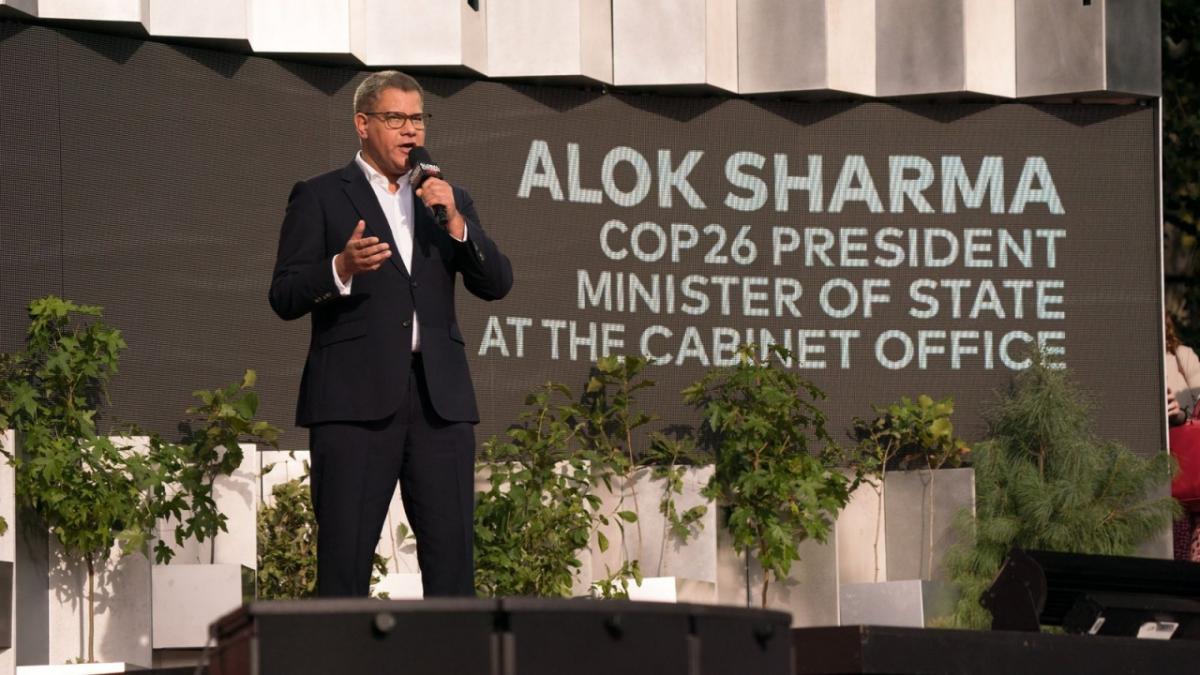 At the end of the month, world leaders will gather for the most critical climate conference of our generation. This year’s United Nations Climate Change Conference (COP26) in Glasgow decides the future of emissions and international cooperation on climate, but some questions remain: Who will commit? And with everything at stake, will it be enough?

COP26 President Alok Sharma delivered a speech from Paris on Tuesday, reiterating the importance of keeping our global temperature rise within the 1.5 degrees Celsius limit set by the Paris climate agreement and calling out certain countries for their lack of commitments.

The appointed leader of COP26 sets the agenda ahead of the talks, heading negotiations while prioritizing the conference's predetermined goals. This year, Sharma has a crucial message for G20 countries: The world’s richest nations “must honor the promises made here in Paris six years ago.”

“Temperatures have risen at least 1.1 above pre-industrial levels. Extreme weather is on the march around the world,” said Sharma, citing the latest Intergovernmental Panel on Climate Change (IPCC) “Code Red” report from August. “This summer we’ve seen devastating flooding in central Europe and China, raging wildfires in North America, record temperatures across the globe, and what some have called the world’s first climate-induced famine in Madagascar.”

Sharma, a British member of parliament and minister of state at the Cabinet Office, highlighted the countries that have renewed and increased their commitments to reducing emissions, using recent net zero target declarations from Turkey and the United Arab Emirates (UAE) as examples. He then went on to point out the lack of effort coming from G20 countries, “which account for around 80% of global emissions.”

“Under the G20 climate and energy ministers meeting in July, every G20 country agreed to set out ambitious 2030 emissions reduction targets before COP26,” said Sharma. “The UK, France, Italy, Germany, the EU, Canada, the US, Argentina, Japan, South Korea, and South Africa have done so. Now the rest must deliver.”

The G20 countries missing from the list of those that have renewed commitments include Australia, Brazil, China, India, Indonesia, and Saudi Arabia.

Days before COP26 begins, G20 countries will meet in Rome for the Summit of the G20 Heads of State and Government on Oct. 30 and 31.

The COP26 president used his speech on Tuesday to stress the importance of climate finance, adjusting economies, and the nationally determined contributions (NDCs), which are at the center of the Paris agreement. NDCs outline each country’s goals of reducing emissions and adapting to climate change.

Currently, the Australian government is under pressure to increase its goal of cutting pollution, according to the Sydney Morning Herald. Sharma is hoping that through its participation in COP26, Australia can commit to a larger pledge toward net zero. The country is one of the world’s top exporters of coal, second only to Indonesia.

On sustainability and clean living, Sharma urged world leaders to leave coal power in the past, shift toward electric vehicles, end deforestation, and cut methane emissions.

“We recognize that these can be complex transitions for countries, which comes as we face global gas supply challenges,” he said. “Yet volatile prices underscore the importance of countries accelerating their move toward more clean, renewable power.”

Sharma also spoke on China’s new coal financing policies, which pledges a halt to building foreign-based coal plants, and he urged G20 leaders to target rampant coal use at home.

“We need a system that accelerates progress, recognizing that whilst all countries must act, those with the greatest responsibility must do more.”

We have a limited window of time to address global warming in order to prevent the currently predicted worst case scenario. As time runs out before the highly anticipated COP26 climate conference ticks down, so do our chances of preempting the climate crisis before bearing irretrievable consequences.

“The point is, that at 1.1 degrees warming, the effects are already alarming,” said Sharma.

According to the IPCC report, Earth’s temperature is on track to exceed the 1.5 degrees Celsius limit, and without immediate action to reduce global warming emissions, we will see even more devastating extreme weather events. Sharma warned that even if the world reaches net zero tomorrow, governments must have plans in place to protect people, land, and vulnerable nations from the effects that human-caused climate change has already set in motion.

Advocacy groups, environmental leaders, and climate activists have urged leaders to commit to climate financing for low-income nations ahead of COP26. At the COP15 conference in 2009, the world’s richest countries pledged $100 billion a year to fund climate adaptation and sustainability for countries at risk of bearing the worst consequences of climate change. In his speech, Sharma urged the G20 to finally deliver on that promise.

“I hope that we will come together as a global community to help equip the most vulnerable to protect themselves from climate change,” he said.

“Success — or failure — of COP26 is in [world leaders’] hands; and so is the fate of the Paris agreement ... because since it was signed, the world has not done enough.”