Aramark recognized as a National Partner for Investment in City Year 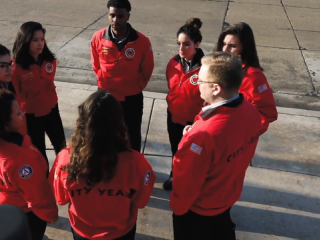 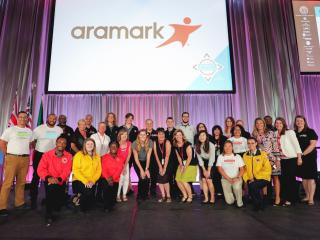 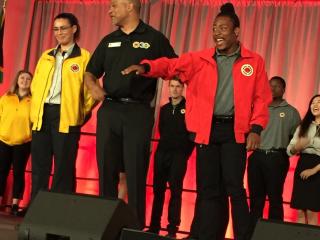 “On behalf of our 270,000 associates around the globe, we congratulate Michael Brown and the entire City Year organization for the tremendous impact they have made on students and schools over the past 30 years.” said Eric Foss, Aramark’s Chairman, President and CEO. “Aramark and City Year share a passion for service and a commitment to local communities. We take great pride in helping City Year bring their important work to life.”

Aramark’s mission of enriching and nourishing lives is connected to their philanthropic investments in various areas including education. By partnering with City Year to redesign its uniform in time for City Year’s 30th anniversary, Aramark plays a pivotal role in the work of City Year AmeriCorps members, who serve full-time as tutors, mentors and role models in more than 300 high-need schools across the country.

“The City Year uniform represents a big idea—that from year to year, school to school, city to city, and generation to generation, there is an unbroken chain of idealism expressed by the young people who serve with us,” said Michael Brown CEO and co-founder of City Year. “When our students see someone in the City Year jacket, they know that person is someone they can trust—and Aramark’s partnership with us on the launch of this new uniform helps that connection happen.”

City Year’s highly trained AmeriCorps members will wear their new uniform as they serve more than 200,000 students across the country. According to research by Policy Studies Associates, schools partnering with City Year—as compared with similar schools without City Year—were up to two-to-three times more likely to improve on math and English assessments.

Aramark has been an important partner for City Year for the past 11 years, serving as City Year’s official uniform supplier, providing in-kind advertising support on college campuses for AmeriCorps members and sponsoring City Year locations in Los Angeles and Philadelphia.

About City Year
City Year helps students and schools succeed. Fueled by national service, City Year partners with public schools in 28 urban, high-need communities across the U.S. and through international affiliates in the U.K. and South Africa. Diverse teams of City Year AmeriCorps members provide research-based student, classroom and school-wide supports to help students stay in school and on track to graduate from high school, ready for college and career success. A 2015 study shows that schools that partner with City Year were up to two-to-three times more likely to improve on math and English assessments. A proud member of the AmeriCorps national service network, City Year is supported by the Corporation for National and Community Service, local school districts, and private philanthropy from corporations, foundations and individuals. Learn more at www.cityyear.org, City Year’s Facebook page, on Twitter, and LinkedIn.

About ARAMARK
Aramark (NYSE: ARMK) proudly serves Fortune 500 companies, world champion sports teams, state-of-the-art healthcare providers, the world’s leading educational institutions, iconic destinations and cultural attractions, and numerous municipalities in 19 countries around the world. Our 270,000 team members deliver experiences that enrich and nourish millions of lives every day through innovative services in food, facilities management and uniforms. We operate our business with social responsibility, focusing on initiatives that support our diverse workforce, advance consumer health and wellness, protect our environment, and strengthen our communities. Aramark is recognized as one of the World’s Most Admired Companies by FORTUNE, as well as an employer of choice by the Human Rights Campaign and DiversityInc. Learn more at www.aramark.com or connect with us on Facebook and Twitter.

Aramark Named to Newsweek's 2023 List of America's Most Responsible Companies

Aramark Volunteers Give Back to Local Communities This Holiday Season

A Focus on Indigenous People, Cuisine, and Culture for Native American Heritage Month