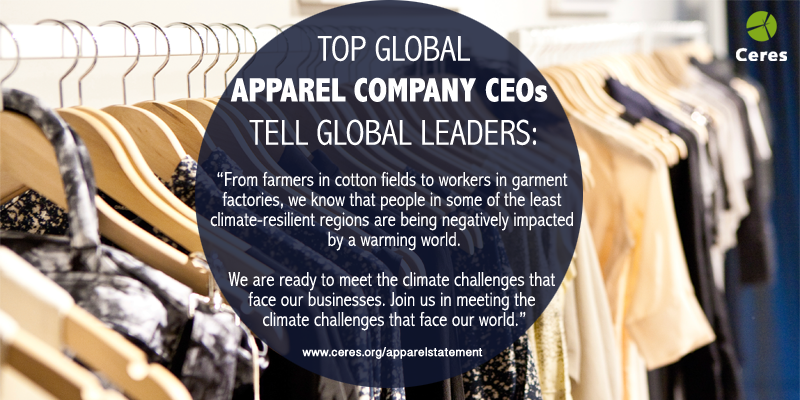 The declaration, signed by top executives at Levi Strauss & Co., Gap Inc., VF Corporation and four other companies, was issued as government leaders from 190 countries are in Paris for climate negotiations known as the 2015 United Nations Conference of the Parties (COP21). The negotiations began on Monday and will culminate with a possible international agreement on Dec. 11.

The statement was organized by the nonprofit sustainability advocacy group Ceres.

“We come together … to acknowledge that climate change is harming the world in which we operate,” wrote the business leaders, which also included CEOs at H&M, Eileen Fisher, Adidas Group and Burton Snowboards. “Climate change mitigation and technological innovation are vital to the health and well-being of those who make and use our products, as well as to the future supply of materials needed to make those materials.

“Therefore, we call on you to reach a global agreement that provides the certainty businesses need and ambition climate science demands.”

The statement highlights negative impacts from climate warming, whether from compromised cotton production for farmers to garment factory exposure in some of the world’s “least climate resilient regions.” The seven companies are among the world’s biggest users of cotton, with VF Corp. alone buying roughly one percent of the world’s cotton.

The statement also calls for strengthening mechanisms in the climate deal to ensure “net zero greenhouse gas emissions well before the end of century,” including assurances that national climate commitments are strengthened every five years, starting in 2020. It also highlights the importance of adaptation funding to build climate-resilient economies and communities.

“At VF, we support a low-carbon, energy efficient global economy and are doing our part to contribute to meaningful and measurable progress in the fight against climate change,” said Eric Wiseman, Chairman and CEO of VF Corporation, owner of more than 30 iconic apparel and footwear brands, including The North Face, Timberland, Vans and Wrangler.

“The time for global action on climate is now,” said Chip Bergh, president and CEO of Levi Strauss & Co. “We call on our leaders to reach a strong agreement in Paris to stem global warming.”

“We have to think differently about business as a bridge to change. We have the powerful opportunity to come together across our industry to co-create how we measure success, not only in dollars but in the cost to humanity and the environment," said Eileen Fisher, Founder and Chairwoman of her namesake company. "This includes committing to practices and policies that directly address the apparel sector's impact on climate change.”

“As representatives from around the world gather in Paris to craft an agreement to avert the most serious effects of climate change, it offers great hope to see these global apparel giants come together to call for action,” said Mindy Lubber, president of Ceres. “These businesses see that the impacts of climate change cannot be ignored and that there is tremendous opportunity in tackling this challenge.”

The full statement can be viewed here.

California Bills Would Give Investors, Consumers and Other Stakeholders Key Information About Companies’ Greenhouse Gas Emissions