Recycling is Good BUT Behaviour Change is What’s Really Needed. 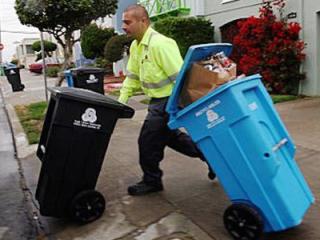 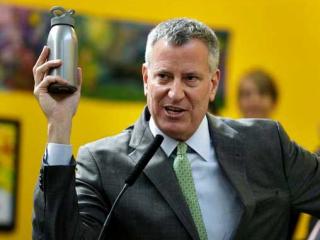 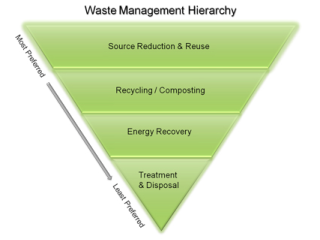 Have you seen the documentary ‘Racing To Zero’ yet? It spotlights San Francisco’s efforts to achieve an aggressive Zero Waste goal of diverting 90% of its municipal waste from landfill by 2020. San Francisco leads the country in this endeavor, and in that regard has much to teach the rest of us. However, the film’s too sunny presentation of the City by the Bay’s recycling efforts to the near exclusion of ‘reducing’ and ‘reusing’ risks sending a message to consumers that could perversely result in more waste generation—and wasteful consumption, not less.

How To Reduce Waste in the Garbage Capital of the World

I’ve been spending quite a bit of time lately better understanding my hometown of New York City’s incredibly wasteful ways. We New Yorkers generate 11 lbs. per person of waste per day and those of us working types, 4lbs. per day. With no active landfill or incinerators (Fresh Kills was briefly re-opened to house 9/11 waste and incinerators were nixed years ago as too dirty.), we spend $300 million per year shipping our waste to Virginia, Pennsylvania and other states. (A ‘yikes’ in here would be very appropriate.)

So it was very exciting to see Mayor Bill de Blasio unveil on Earth Day his OneNYCPlan, with its goal of diverting from landfill 90% of NYC’s municipal waste by 2030.

Talk is abuzz in the waste-y circles I run in about how, in the consumption and garbage capital of the world, we will make that happen. (And early encouraging signs are that the City won’t resort to mostly incineration. According to one city official I interviewed, “We have our principles. We strictly adhere to solid waste hierarchy.”)

So I was quite interested to see ‘Racing to Zero’ when it was screened on May 28 as part of a fundraiser for local composting efforts by the Manhattan Solid Waste Advisory Board.

A Too Sunny Presentation of Recycling

According to the film’s website, “Racing To Zero is a quick-moving, upbeat documentary presenting new solutions to the global problem of waste. By simply substituting the word RESOURCE for the word GARBAGE, a culture can be transformed, and a new wealth of industries can emerge.”

This is a powerful premise, and one that needs to be embraced broadly in our society. To its credit, the film does a great job of explaining how San Francisco is able to divert laudably high levels of its waste from landfills and turn it into new products via recycling, or soil amendment (composting).

However, in its zeal to get out its message, the film depicts recycling as a magic bullet, and as such risks a ‘Rebound Effect‘ if consumers start to view recycling as permission to continue to consume at the current rate, rather then change to less environmentally impactful forms of behavior.

A seemingly simple sounding concept, recycling is fraught with complexity; any discussion of its merits needs to be balanced by a sober discussion of its limitations as well as its relationship to other, more environmentally preferable solutions to solid waste such as reducing and reusing.

Why Recycling is Not a Magic Bullet

Recyclables can be a valuable source of materials that can be turned into new products for often less cost and environmental impact than mining and processing virgin materials. It creates jobs and protects resources. (Learn about the U.S. EPA’s Sustainable Materials Management approach HERE.)

That said, not all materials can be physically recycled (due to difficulties separating for instance), or benefit from profitable markets that would warrant their collection. Contrary to the ’round and round’ image conveyed by the chasing arrows recycling logo (See side bar), not all materials can be recycled indefinitely; unlike glass or aluminum, paper fibers become shorter and weaker with each successive round of recycling, and eventually wind up in a landfill or compost pile.

Most plastics, when they are collected at all — typically only #1’s (PET) and #2’s (HDPE) are collected in local communities – are simply ‘downcycled’ into lesser quality material.

Finally, recycling has its own environmental impacts, starting with the energy (and resulting carbon emissions) it takes to transport recyclables from collection point to materials recovery facility (MRF) to eventual point of re-manufacture. So it is entirely possible that, from an environmental standpoint, products made from 30% recycled content could actually be environmentally as well as economically preferable to 100% recycled content.

San Francisco’s Zero Waste Manager, Robert Haley, plays a key role in the film, deservedly touting his city’s enormous achievements in diverting its now reported near 80% of waste to landfill (though some might dispute this figure as high given measurement techniques.) However, his enthusiasm for recycling can lead viewers to overestimate this method’s benefits. Picture this: at one point in the film Haley stands in front of a deli refrigerator that’s stocked with single-serve cans and bottles of soda pop and iced teas, and throwing his arms in the air, proclaims, “They are all recyclable!” (Would I be disrespectful to insert here a “Gag me with a spoon?” Read on to learn why.)

Zero Waste Means Focusing on the Other Two ‘R’s

Achieving ‘Zero Waste’ is about more than collecting recyclables and turning them into new products. It’s about an integrated approach to solid waste management that reduces the amount and toxicity of wastes in the first place. It’s about making sure that waste materials are directed to their highest and best use; this may include refilling some packages, for example, rather than simply sending them for recycling.

Finally, according to the definition adopted by the Zero Waste International Alliance, and espoused by the U.S. Zero Waste Business Council and others, zero waste is about more than landfill diversion. It is about preventing waste from occurring in the first place by changing consumption culture with a prominent role for Reduce and Reuse, the two R’s that rank above Recycling in EPA’s Waste Management Hierarchy.

‘Racing to Zero’ has close to zero (couldn’t resist the pun) discussion of San Francisco’s efforts to promote these other 2 R’s ) by highlighting campaigns (which I presume exist) to encourage consumers to use refillable water bottles and coffee cups, bring their own bags to the supermarket, or shop in thrift stores, swap instead of buy new, or obtain used products via online platforms such as e-bay and Craig’s List.

These other 2 R’s are just as important if not moreso within an integrated solid waste management plan (and documentary) educating folks about the best way to get to zero waste.  (To his credit, in announcing NYC’s OneNYC plan, Mayor de Blasio took advantage of the opportunity to pose with a refillable water bottle, suggesting that we in the media capital of the world may have a little something to teach San Fran.)

Composting does play a key role in ‘Racing to Zero’ (and is the ‘star’ of the film’s trailer), as it is considered to be a form of recycling, and its benefits are well displayed, although its treatment too could benefit from a more balanced discussion of alternative, environmentally preferable ways of disposing of food waste such as nourishment for humans and animals.

Recycling Must Not Become the New ‘Away’

Understanding why ‘Racing to Zero’ is so unbalanced is not germane to this article (although the film’s producer is listed as an ‘artist in residence’ at Recology, the City’s outsourced recycling organization, and Recology is listed as a Partner on the official website.) And I don’t mean to ‘shoot the messenger’. This film has much to teach about the potential value of recycling to shift perceptions of trash from ‘garbage’ to a ‘resource’. Given its single-minded focus on recycling, perhaps it would have been better titled along those lines rather than as a portrayal of San Francisco’s zero waste efforts with its multi-pronged approach.

My main point is this: without a more concerted focus on Reduce and Reuse, together with a more balanced discussion of the effectiveness of recycling with the context of achieving Zero Waste, ‘Racing to Zero’ and any related communication by any other group to follow will lose an important opportunity to credibly educate the public at large and those of us in cities like my own about the role that recycling can play as an effective solid waste strategy. At worst, it risks sending a message to consumers that recycling is the new ‘away’, and that our throwaway culture can continue unabated.

What Do You Think?

This is an important topic! Let’s discuss and debate this so so that future readers may benefit. What do you think? Am I too harsh? Justified? What might this documentary have done differently? Do you know of any other documentaries that do a better job of explaining what it takes to get to Zero Waste?

This article was originally published on the We Hate to Waste website________________________A waste watcher since age four, Jacquie Ottman has spent the last 25 years showing Fortune 500 companies and the U.S. government how to develop and market products that can meet consumer needs sustainably. An expert on green marketing and a certified creative problem-solving facilitator, she’s the author of 5 award-winning books. Read more about Jacquie HERE.

Sucking up to Business Is a Certain Path to Ecological Collapse

Can a Culture of Capitalism Ever Support a Truly Green Leader?

Dear Climate: You Don't Scare Us!

Will Fear of COVID-19 and Loathing of Capitalism Drive Systemic Change?

Is Covid-19 the Silver Bullet for a Stable Climate?

(Part 4) Surviving Climate Change: Can Democracy Save Us?