At Sappi, we measure our performance to improve our environmental and social responsibility 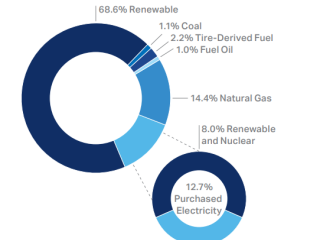 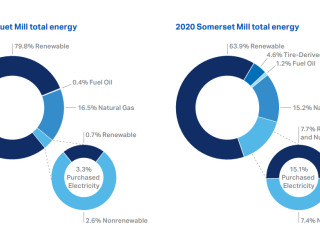 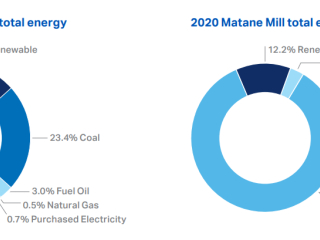 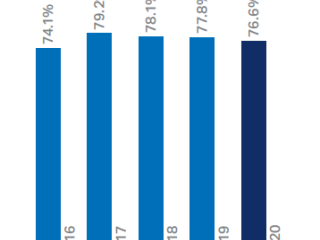 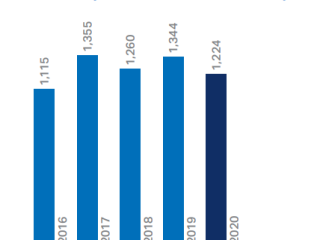 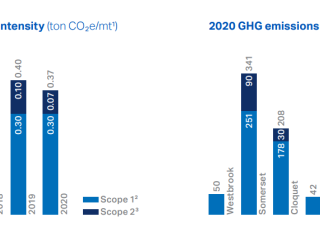 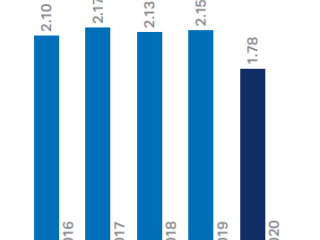 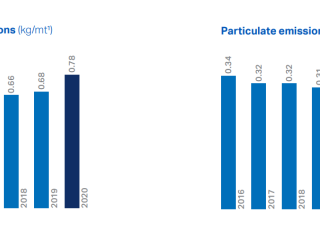 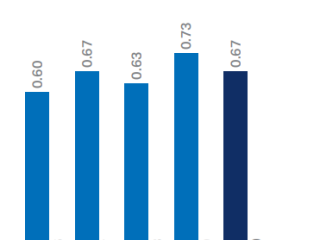 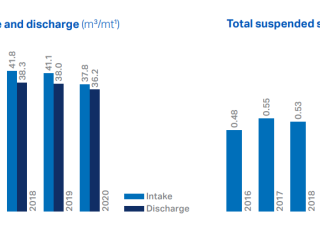 This year we included Matane in our KPI metrics. Renewable energy is the dominant source of energy at our four SNA mills, as indicated in this pie chart and the following ones. Matane has the highest renewable contribution at approximately 97 percent. In total, nearly 77 percent of our power was generated by renewable resources after accounting for sales of renewable energy certificates (RECs). In 2020, our total on-site renewable energy use consisted of black liquor at 63.6 percent, biomass at 33.9 percent, sludge at 1.1 percent, hydro at 0.6 percent, and bioliquid and/or biogas at 0.8 percent. Purchased electricity also includes a renewable contribution, and we benefit from the commitments of our regions to increase the amount of renewable energy in the market.

The renewable energy bar chart provides a historical perspective of the percentage of renewable energy we used over the last five years. The contribution has been relatively consistent in the past three years.

Other sources of energy we use are composed of alternative fuels and fossil fuels. Both are noted on the pie charts. Alternative fuels (waste that is repurposed instead of disposed of or landfilled) are also noted on the pie graph and include tire-derived fuel, waste oil, and construction and demolition debris. Fossil fuels predominantly include the use of natural gas, but also some coal and fuel oil. With the retirement of Paper Machine 9 and the majority of the energy complex at the Westbrook Mill, we will no longer use coal at any SNA location.

GHG emissions, measured as intensity value (tons CO2e/mt), are lower in 2020 compared to 2019; see cumulative bar graph below. This is because of the addition of the Matane Mill. The bar graph depicting emissions by mill makes this clear. Without the addition of Matane, we would have seen an increase in overall GHG emissions intensity due to the production impacts from COVID-19. In addition, Somerset used less biomass this past year, and less black liquor was available at Cloquet.

Like the energy data, the following data also includes the Matane Mill this year. NOx emissions were positively influenced by Matane’s extremely low emissions as well as an increase in natural gas use over biomass at Somerset. Again, Matane’s data helped with SO2 emissions, but not enough to offset the increase as a result of downtime on the noncondensable gas incinerator at Cloquet. The improvement seen in particulate emissions were influenced by Matane, which has extremely low particulate emissions.

Our North American mills draw water from surface sources (rivers and lakes) and return treated water to the same primary sources. As we do with our emissions, we manage our use and discharge of water in accordance with comprehensive environmental permits. The Matane Mill is now included in this data set.

Our specific water intake and discharge dropped compared with last year. This is because of the addition of Matane to the data. Matane does not make paper—only pulp—and therefore its water use is lower.

Biological oxygen demand was down compared with 2019, partly the result of Matane having a comparatively lower value. Total suspended solids notably increased compared with previous years (see bar charts). This was not a result of the addition of Matane to the data and more because of mill curtailments resulting from COVID-19, causing more frequent paper machine startups and shutdowns and impacting the management of these process streams. The data is also reported on a specific basis, so the lower production also has a negative impact on the results.

Managing our solid waste and finding ways to minimize landfill waste remain a focus at all of Sappi’s North American mills. We continue to search for beneficial uses of our byproducts. The Cloquet Mill continues to work with local farmers who use boiler ash and lime mud as soil amendments for managing soil pH, which improves growing conditions for certain crops. Somerset landfill rates were down in 2020 as more gas fuel burning produced less boiler ash and Westbrook had less ash due to downtime. Matane is included in the data this year. Matane has a higher landfilling percentage than the other SNA mills, thus notably influencing this metric compared to previous years. Matane is in the process of assessing and reducing its waste to landfill contribution.