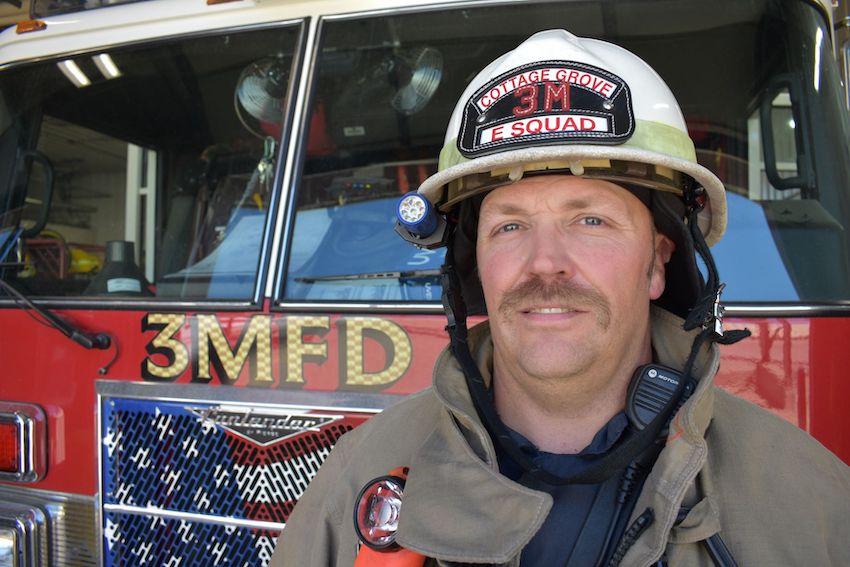 Growing up, Alex Wiesner didn’t imagine he’d become a firefighter. However, through hard work and a commitment to serving his community, he did just that – and was recognized by the city of Cottage Grove as their 2021 Firefighter of the Year.

Alex started his career as a muti-craft mechanic on the plant engineering maintenance team when he joined the 3M Cottage Grove team in 2013. A few years later, a teammate who joined 3M the same time as Alex encouraged him to apply to join the emergency response squad, or 3M “E-Squad” – the first two plant engineering members to ever pursue a spot on the team.

After a year of training in 2017, which included on-site emergency medical response from the American Red Cross, a period in Texas for brigade fire training for refinery and industrial environments, and the standardized municipal code “Intro to Fire 1” course, Alex took and passed the state-required test to become a certified firefighter.

“Each training 3M provided me built on the previous one, and I knew everything I was learning would serve our site and help keep our employees safe,” Alex said. “The further I went, the more I could serve while still being a full-time team mechanic. It was the best of both worlds.”

Alex continued to grow. In 2017 after consulting with Environmental Health and Safety leadership at the Cottage Grove site, he and two other site E-Squad members completed emergency medical training (EMT) school at nearby Inver Hills Community College to continue building the workforce first response team. It was during this period when Alex applied to the City of Cottage Grove to become a part-time firefighter/EMT.

“The training provided by 3M got the ball rolling for me to be able to work with and serve the city,” he said. “3M’s investment in me benefits our community. I try to encourage other members of the 3M squad to work for their local municipal fire teams as well because it is a great opportunity for us as a company to give back.”

Alex also supports Cottage Grove’s efforts to become a “heart safe city,” where each business in the city has a CPR certified team member who can administer the lifesaving technique in the event of a cardiac emergency. Alex has been involved in training the public to meet that goal.

“After all the training 3M put me through, and the growth we’ve experienced locally, it seemed like a waste to not share it and serve others. Isn’t that what we’re supposed to do?” he said.

In comments delivered after the department’s banquet, Chief Redenius celebrated Alex’s work ethic and willingness to help the department. “Alex was a workhorse all year,” he said. “You do not see Alex sitting around. He is either out on calls or in the office area or out in the bays working on something, training or cleaning.”

Alex plans to continue developing his skills as both an active 3M team member and community member.

“3M has been hugely supportive of me being able to give back to my community by serving the Cottage Grove fire department,” he said. “Helping me manage my schedule and making sure everything is covered is the company positioning me for success – not just with my 3M responsibilities but being able to serve my neighbors and our city as well.”