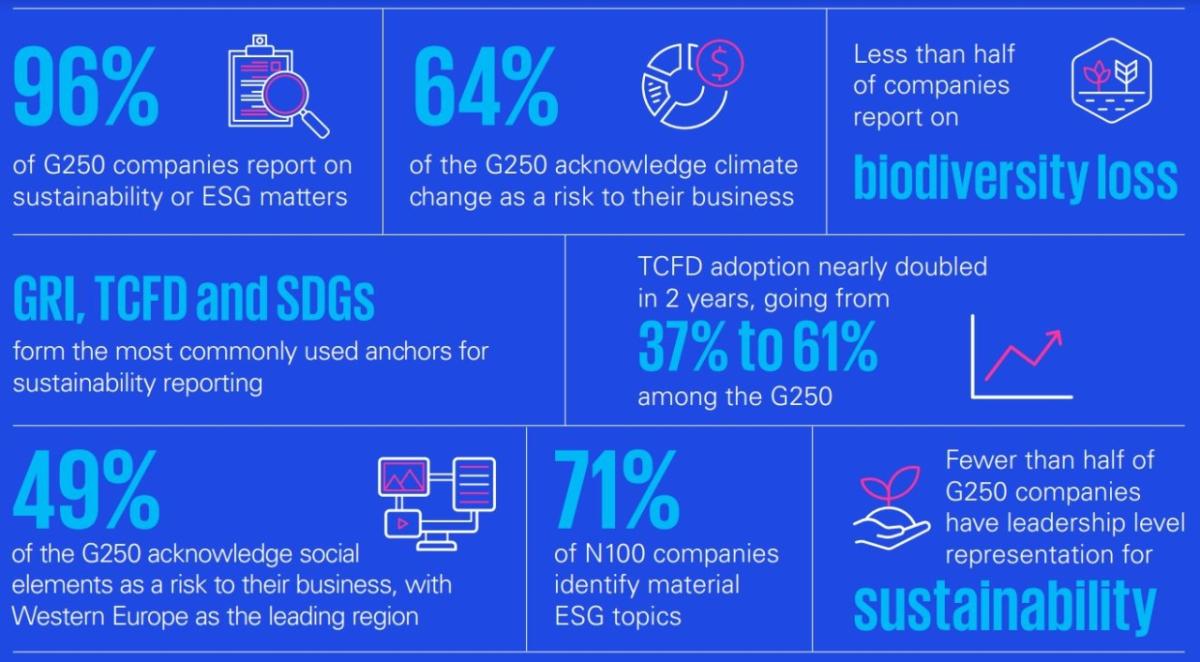 November 2, 2022 /3BL Media/ - A major stocktake on the state of sustainability reporting around the world has revealed that GRI provides the ‘first and foremost’ global standards, used by more large companies than ever before.

The KPMG Survey of Sustainability Reporting (published 26 October) examined the disclosure practices of the world’s biggest 250 companies by revenue (the G250), as well as a larger pool of the top 100 businesses in each of 58 countries (the N100).

Findings in the 2022 research include:

“With more companies committing to globally accepted reporting standards to deliver transparency on their impacts, this major research from KPMG offers reasons to be encouraged. If there was any remaining doubt, it is now abundantly clear that comparable sustainability reporting is widespread across countries and sectors – and it’s here to stay.

Deeper accountability, however, requires deeper disclosure, ensuring decisions are based on robust data and not just perceptions. While the research shows climate risks are widely addressed, recognition of biodiversity impacts is worryingly low. A revised GRI Biodiversity Standard, to launch in 2023, will be a key driver for increased reporting on this crucial topic, which goes hand-in-hand with efforts to tackle climate change.

What the survey does not yet reflect are new developments in the corporate reporting landscape, including incoming sustainability standards from the IFRS Foundation, and the European Union. I can reassure GRI reporters that we have an essential bridging role across both these initiatives, underlining the growing relevance of our Standards.”

Published since 1993, the KPMG Survey of Sustainability Reporting has charted a sustained rise in reporting around the world, which has mirrored GRI’s growth since the organization was established 25 years ago.  Over the past two decades, sustainability reporting by the G250 rose from 45% in 2001 to 96% today.

GRI has initiated a project to update the Biodiversity Standard (GRI 304), in response to escalating concerns over biodiversity loss. A public comment for the exposure draft will begin later this year, with publication of the new Standard expected in Q3 2023.

Global Reporting Initiative (GRI) is the independent, international organization that helps businesses and other organizations take responsibility for their impacts, by providing the global common language to report those impacts. The GRI Standards are developed through a multi-stakeholder process and provided as a free public good.

Sustainable Agriculture: Why a Changing Policy Landscape Matters to Business