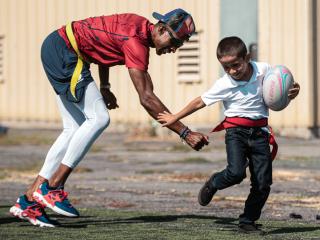 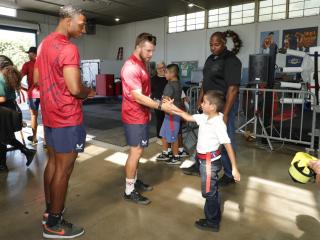 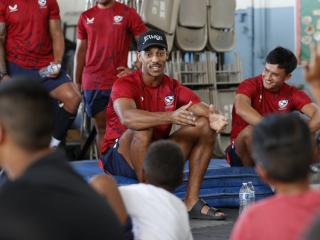 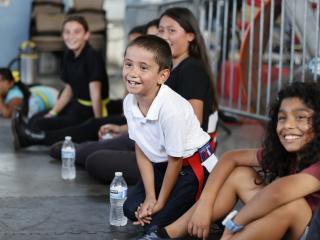 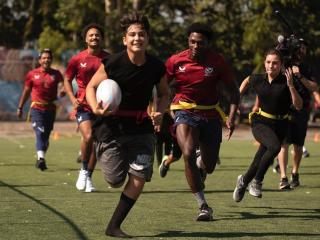 As part of a series of events leading up to AEG’s 2022 HSBC LA Sevens, students across Southern California participated in AEG’s and USA Rugby’s LA Sevens Adopt-A-Country Program. The program, which promotes international cultures and traditions, is part of the U.S. leg of the World Rugby Sevens Series, that was hosted at Dignity Health Sports Park in Carson, CA, on August 27-28, 2022.

The Adopt-A-Country program paired students from  schools across the region with one of the 16 competing teams in the HSBC World Rugby Sevens Series and allowed the children to “adopt a country” to learn more about the game of rugby as well as the customs of each country. Top players from across the teams, including South Africa, USA, Ireland, Samoa and Spain, visited their respective schools or youth-based organizations to engage with the students.

The partnership between the USA Sevens Rugby, HSBC and Adopt-A-Country aims to promote social awareness of rugby while also connecting students to a world beyond the classroom through the implementation of hands-on lessons and values designed around the adopted country. In addition to educating, the program aims to introduce students and teachers to rugby and its core values: integrity, passion, solidarity, discipline, and respect.

“Adopt-A-Country is the perfect way for children to embrace the core values of rugby and learn about the different countries where the sport is played,” said Dan Lyle, Director of AEG Rugby. “Some of the kids have never heard of rugby before participating but through the program they are now excited to get out there and play. They want to learn about new things in the world around them.”

The HSBC World Rugby Sevens Series is an annual series of international rugby sevens tournaments taking place over 10 global cities, including Paris, London, Dubai and Sydney, and features national teams from the top 16 countries. LA SEVENS is promoted by AEG Rugby and is the largest annual rugby event in the United States.

To learn more about the LA Sevens, please click here.