3 Reasons Fleets Should Swap the Gas Station for Mobile Fueling

Fleet fueling should be sustainable, efficient, and convenient, but the gas station doesn’t check any of these boxes. Instead, fleet managers should look to mobile fueling. 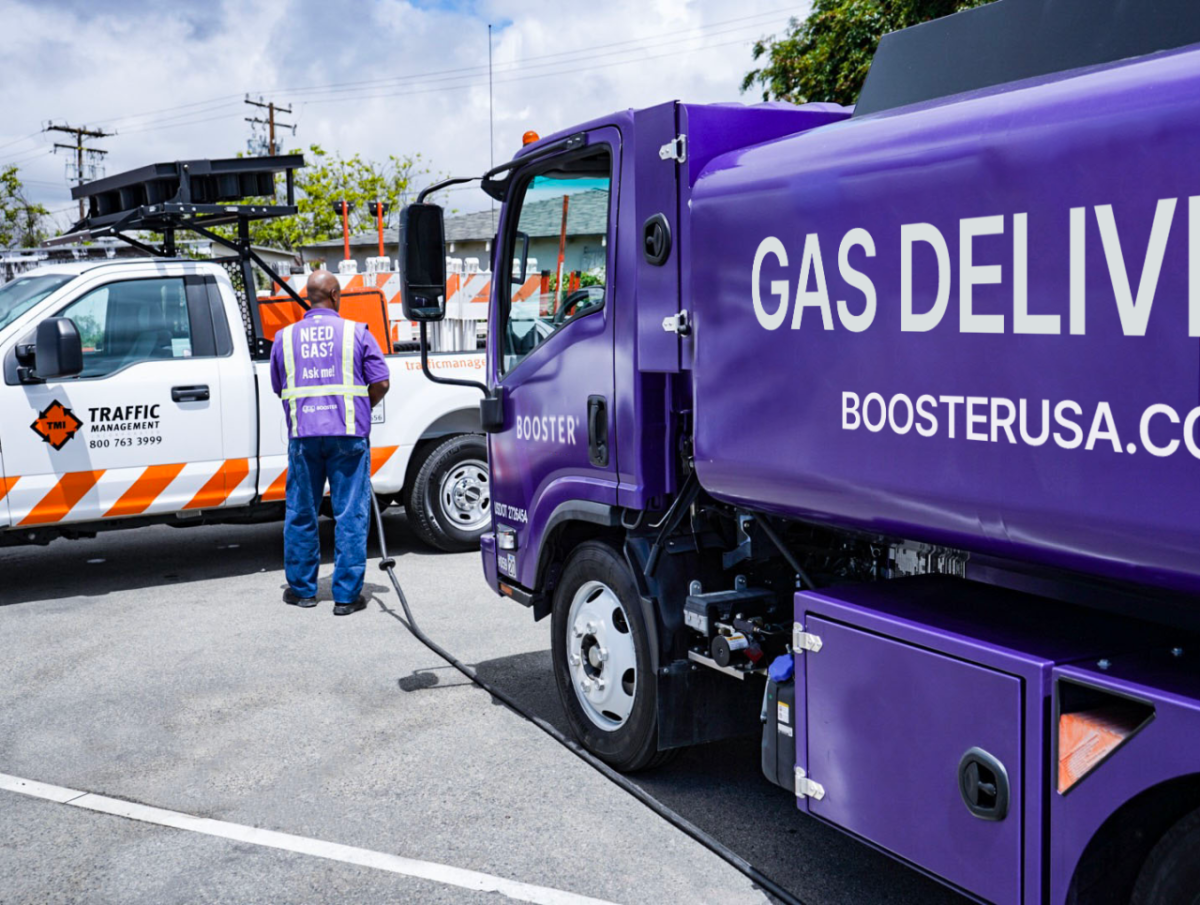 Since the beginning of motor vehicle travel, drivers have had virtually no choice but to patronize the gas station. Despite them being dirty and often unsafe, they remain a legacy staple of the transportation industry. But this may not be the case for long.

As the booming mobility retail industry has brought delivery to sectors from fashion to literature to groceries, consumers have grown accustomed to the convenience of goods and services meeting them where they are. With Booster’s mobile fuel delivery service, this trend now extends to fleet fueling. Where once fleets were reliant on a model requiring each driver to take individual trips to the gas station, mobile fuel delivery offers a more flexible, efficient system in which service professionals bring fuel directly from the terminal to the fleet yard to fill vehicles in their non-operating hours.

For many, making the switch is a no-brainer. But for those fleet managers who need a bit more convincing, here are three reasons your fleet should abandon the gas station.

1. Mobile Fuel Delivery is Better for the Environment

There is a reason gas stations stink and look dirty: they’re significant polluters. All too often we hear news of the many fuel leaks and spills from gas stations, which contaminate community drinking water and poison nearby waterways. According to the Environmental Law Institute, a typical gas station dispensing one million gallons per year would see annual spillage of 70 to 100 gallons. For a large-volume gas station like Costco, which can sell around 20 million gallons of gasoline per year, spillage could reach 2,000 gallons annually.

Another source of spills, leaks and air pollution at gas stations are underground storage tanks (USTs), which store fuel below the surface. Often made from bare steel and neglected, USTs are known to leach fuels and chemicals into the environment as they age and deteriorate. As of September 2021, the U.S. EPA confirmed nearly 600,000 UST leaks nationwide.

As fleets of all sizes feel the rising costs of operations and maintenance — fleet maintenance costs in 2022 rose 10% from 2021 — fleet managers must boost efficiency and cost-effectiveness. Among other things, this means reducing the number of off-route tasks drivers must complete — gas station visits included. The time and money used going to and from the gas station would be much better spent supporting a fleet’s core business objectives like delivering packages or mowing lawns.

On average, each gas station trip takes about 20 minutes. When you consider that multiplied by the rate of 15.3 gas station trips per month,* the time adds up quickly — to about 61 hours a year. So does the money.

Booster estimates that each fleet vehicle drives an average of 402 additional miles annually just to gas stations. This eats up significant amounts of fuel and on-the-clock time, costing fleets money. Between labor costs, fraud, maintenance, wear and tear and gas, fleets spend an average of $1,600 per fleet vehicle annually on gas station trips. For a fleet of 20, that’s $32,000 that could be saved annually by ditching the gas station in favor of mobile fueling.

As the transportation sector continues to decarbonize, sustainable alternative fuels will be a crucial tool in making immediate decarbonization gains for fleets, and for long-term decarbonization of hard-to-electrify heavy- and medium-duty vehicles.

Sustainable alternative fuels are made from renewable feedstocks like biomass, municipal waste, industrial scrap and more, and often as direct replacements for conventional fuels with no equipment upgrades or replacements. They help fleets become more sustainable (and often more efficient) by offering lower carbon intensity and better performance than their conventional counterparts.

Despite all the benefits of sustainable alternative fuels, lack of access remains a barrier to adoption because few gas stations offer them. As of January 2023, out of about 145,000 gas stations in the U.S., only about 5,900 carry alternative fuels (including compressed natural gas, ethanol, biodiesel and hydrogen) — fewer than 5%. Mobile fuel delivery expands access to these fuels by offering a range of sustainable alternative options without the need for development of fixed infrastructure to support them.

Fleet fueling should be sustainable, efficient, and convenient, but the gas station doesn’t check any of these boxes. Instead, fleet managers should look to mobile fueling to not only avoid the time and burden associated with sending each fleet driver to the gas station, but also save money and lower overall emissions. To learn how mobile fueling can help you lower emissions and save money, reach out to our sales team at fleet@boosterfuels.com or read more on our website.

*According to Booster company data

Women Supporting Women: Ericka Ramon on Being a Woman in the Transportation Industry

Booster — Who We Are and What We Do

At Booster, Bold Is in Our DNA

A Change in Fueling Solutions Could Revolutionize the Fleet Industry

4 Things Every UST Owner and Operator Should Know