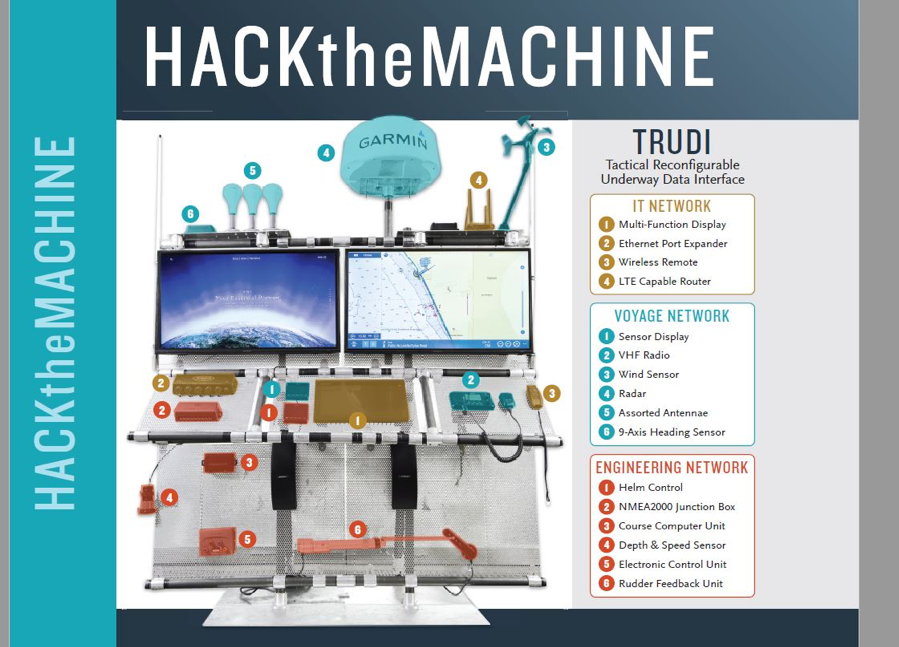 The three tracks of the event focused on “Maritime Capture the Flag,” “Data Science and the Seven Seas,” and “Hack for the Oceans.” Competitors built cross-disciplinary teams that bridged the Navy, academia and industry to develop innovative approaches to complex problems. Each of the three tracks was sponsored by a Navy program manager who took insights from the crowd and turned them into relevant military outcomes.

For the Maritime Capture the Flag track, Booz Allen’s elite team of engineers conceptualized and built TRUDI, a fully-functional model of the networked systems that equip connected maritime vessels.

Insights from Maritime Capture the Flag track will inform design requirements that the Navy will use for the installation of programmable logic controllers aboard ships, whereas lessons learned from the Data Science and the Seven Seas track to build tools that support safer navigation. Other ideas from the event will be used to provide future Consolidated Afloat Network System developers with ideas to accelerate the use of agile and DevOps processes. The Navy’s Cyber Warfare Development Group will use lessons learned to implement high velocity learning for new engineers who may not be aware of specific technologies in the maritime domain.

“Data insights gleaned from our collaborations with industry and academia are especially important as naval engineering is undergoing a fundamental shift, said the Navy’s Chief Engineer and HACKtheMACHINE event lead, Rear Admiral Lorin Selby. “In the 21st-century, organizations gain insight, process data, and make decisions through digital systems, rather than the industrial systems the Navy has used to maintain global pre-eminence for the last hundred years. Development and deployment of digital capabilities involves a timeline of days and weeks rather than years which requires significantly new processes, tools, and approaches.”

“As a central hub for innovation, HACKtheMACHINE serves as a gateway for entrepreneurs and companies to partner with the Navy. It provides mentorship opportunities for non-traditional partners who otherwise would not interact with the Navy. And, it seeks to inspire a new generation of talent to apply their skills to the ever-evolving digital challenges that can only be solved through partnership,” added MacCarthy.