Stevens recognized for outstanding volunteer service by the company 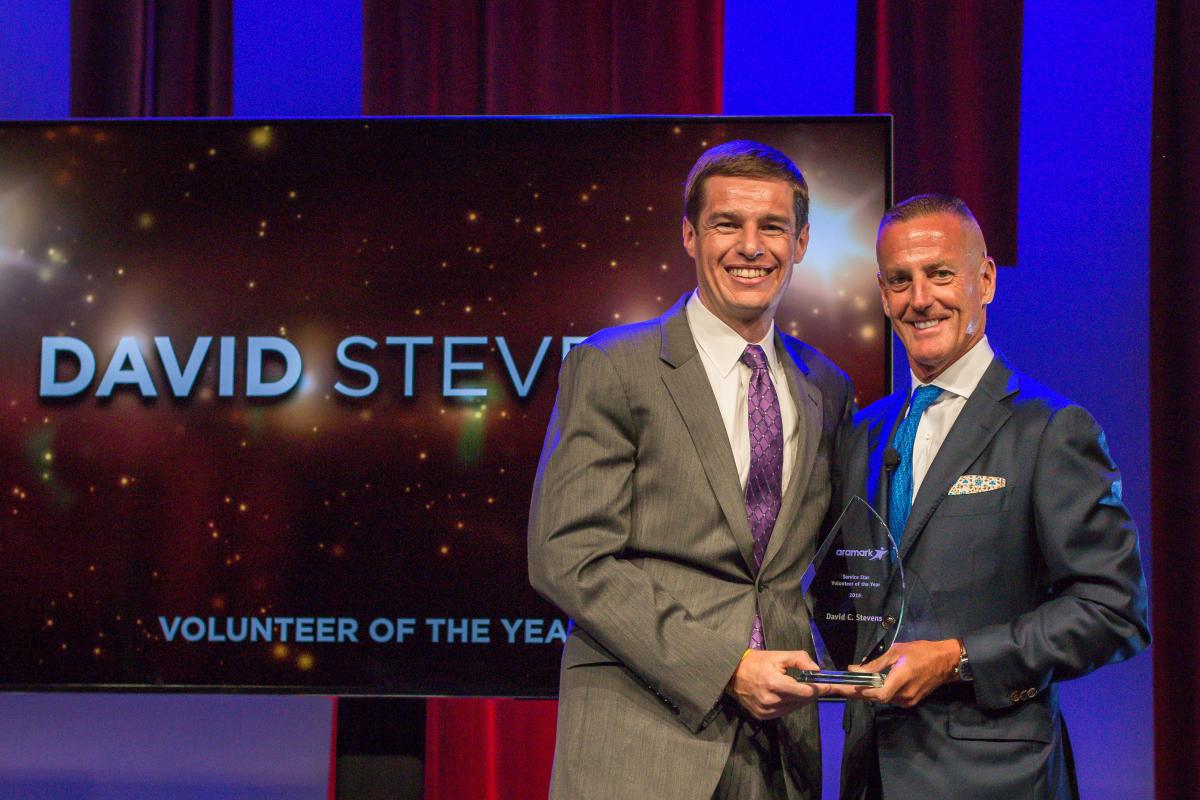 PHILADELPHIA, June 30, 2016 /3BL Media/ — David Stevens, Manager of Capital Planning for Aramark’s Healthcare Technologies division, has been honored as the company’s 2016 Volunteer of the Year, in recognition of his commitment to volunteer service and leadership in his community.

Aramark, a global provider of award-winning services in food, facilities management, and uniforms, acknowledges employees’ extraordinary efforts to live the company’s mission to enrich and nourish lives through the Aramark Service Star Volunteer Awards, which are presented annually.

“David brings Aramark’s mission, of enriching and nourishing lives, to life,” said Eric Foss, Aramark’s Chairman, President and CEO. “David’s lifetime of commitment to serving his community and helping others is truly inspiring and is seen in all of the great work he has done.”

The Aramark Service Star Volunteer Awards, recognizes our employees’ extraordinary efforts to enrich and nourish lives in our communities through exemplary volunteer service.

Stevens was one of 32 honorees that Aramark recognized this year from around the world for giving their personal time and skills to support their local community and part of a select group of more than 300 associates recognized as part of this program since 2008.

After graduating from Ferris State University in 2008, Stevens joined Aramark at NorthShore University HealthSystem, in Evanston, IL, where he was first introduced to Aramark’s service commitment.

“In this role, I had the opportunity to watch smiles happen, during short interactions with guests,” said Stevens. “Patients, grieving family members, doctors, nurses, would come to the cafeteria and have a positive interaction with an Aramark employee. We were change agents with our comfort, food and conversation.”

Since 2013, Stevens has been part of Aramark’s Healthcare Technologies division, located in Charlotte, NC. He’s instrumental in leading and engaging his fellow colleagues in the Carolinas region to support Aramark Building Community health and wellness and workforce education programs to support their local partner, the Salvation Army Center of Hope. Over the past two years under Stevens’ leadership, the team has been involved in a number of projects to improve the health and success of the community and make a significant impact in the lives of hundreds of children and families.

Stevens is also involved with the Charlotte Chamber of Commerce, by serving on the Board of Directors, the Healthy Charlotte Council, the Nutrition Workgroup and the Index Committee.

For the past six years, Stevens has served on the Ferris State University Alumni Board of Directors, where he sits on an advisory board for the activities of the Ferris State Alumni Association and the alumni office staff.

Stevens attends Myers Park United Methodist Church and serves on multiple committees for the church including both the finance and budget committees. He also volunteers with the Room in the Inn ministry and the Relatives Youth Crisis Center.

As a child, Stevens joined his grandparents on various volunteer activities, preparing meals for the Meals on Wheels Association of America, or accompanying them to the local Playhouse, where they volunteered as ushers.

He was a member of the Boy Scouts and earned the prestigious recognition as an Eagle Scout after transforming an overgrown playground at a local elementary school, into an active learning play space for students. At just 15 years-old, Stevens spearheaded the playground project, partnering with Lowe’s and Home Depot for supplies. In just two days, the area had been transformed, with nature trails, educational signage and books for kids to learn more about nature.

In college, Stevens changed majors after he witnessed the devastation of Hurricane Katrina. He pursued a marketing degree at Ferris State University and became involved in numerous student organizations including Boys and Girls Club, Domestic Abuse Centers, 911 Tributes and led a United Way campaign.

Stevens recently completed his Masters of Business Administration through Wake Forest University. On the weekends, you can find him with his fellow church members, assembling burritos and bicycling down to the local Men’s Shelter to give out a meal.

Stevens has always lived by his personal mantra, “Be the change you wish to see in the world.”

About Aramark
Aramark (NYSE: ARMK) delivers experiences that enrich and nourish people’s lives through innovative services in food, facilities management, and uniforms. United by a passion to serve, our 270,000 employees make a meaningful difference each day for millions of people in 21 countries around the world. Aramark is recognized as one of the World’s Most Admired Companies by FORTUNE, rated number one among Diversified Outsourcing Companies, as well as among the World’s Most Ethical Companies by the Ethisphere Institute. Learn more at www.aramark.com or connect with us on Facebook and Twitter.

Aramark Named to Newsweek's 2023 List of America's Most Responsible Companies

Aramark Volunteers Give Back to Local Communities This Holiday Season

A Focus on Indigenous People, Cuisine, and Culture for Native American Heritage Month